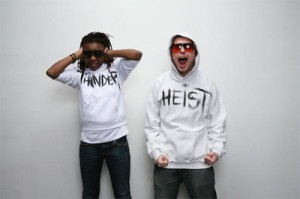 In the beginning, I was strangely intrigued by Canadian duo Thunderheist’s mixture of electro, hip-hop and ghettotech on its early single “Jerk It.” After several late nights at the office with the song on repeat in headphones shoved into my skull, it’s fair to say I was obsessed. It had taken over. The smooth, boldly sexy vocals of MC Isis made me feel abundantly cool. I shifted in my chair. I would tap on the desk, annoy my neighbors. I even typed at the keyboard with bravado. “Let ’em know you’re worth it/Dust it off and ‘Jerk It’,” MC Isis would tell me. Grahm Zilla’s beats dictated the moves. This was January. “That song was so December 2008,” a friend informed me. I didn’t care. Something special had happened here, and I was not gonna let it be ruined. Eventually, I took it off of repeat. Something else stole me away. But, my dear “Jerk It,” I will never forget our time together. Some night, perhaps in the far reaches of the inescapable twilight, or maybe not long at all from now, I’ll dust it off and jerk it again. (Tom Lynch)