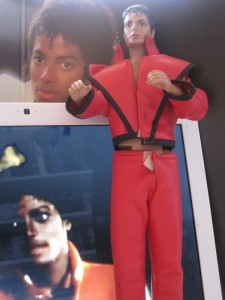 Most of the tributes I’ve been reading about Michael Jackson’s stunning death have offered the same sort of message—that it’s so shocking, so unbelievable, because his existence and being was so supernatural and abnormal, no one could imagine him suddenly dying from a heart attack. A hospital? C’mon. Your first thought would’ve been that he was rushed to the moon or something.The longer Michael Jackson lived the less human he seemed—and, of course, looked—and his life had become such an absurd, grotesque tragedy, who knows what would’ve happened to him if he lived for another twenty or thirty years. It wouldn’t be unfair to assume he wouldn’t have produced accomplished music again—seriously, what was the last good Michael Jackson record?

That said, he touched the lives of hundreds of millions of people, including my own. I heard a rumor that last night in Wicker Park an impromptu MJ dance party broke out in the parking lot of the old Burger King and no one tried to break it up. I hope that’s true. That’s the least we could do for the fallen King of Pop.

When news broke of his death the world stopped its collective moonwalk—even the fucking Weather Channel stopped mid-program to break the news—and some immediately thought of Elvis Presley, some of Kurt Cobain, some of Elliott Smith even. I wasn’t around when Elvis kicked; I was in junior high when Cobain took his own life. This bully came in the classroom that day, devastated, punched me hard in the arm and just said, “He’s gone.” My arm hurt, but not as much as the bully’s heart.

Yesterday was my birthday. I’ll forever remember my twenty-eighth birthday as the day that Michael Jackson died. I got several text messages and Facebook notes from friends jokingly insinuating that it was my fault, his death I mean. Sure, sure, I’ll take the blame. Someone needs to. Michael Jackson was a strange and godlike, lovable and horrifying the same. A heart attack can’t kill someone like Michael fucking Jackson.

But the music, and the way he could move, holy shit. What an artist. What a talent. “Off the Wall,” “Thriller,” jesus. He could stop the world in its tracks.

And he has, one last time.