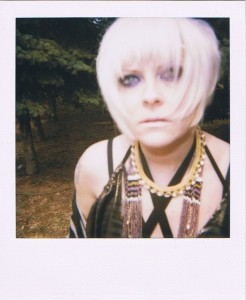 There are those who would be perfectly content living a life absent of any artistic endeavors, but some people can’t get through the day without creating something. Whether it’s sketching the cracked lamp post on the corner of your block or probing your fret-board for that missing, perfect guitar note, the process of creativity is a necessity for some.

“Personally, creating is something I need to do,” Armondo says.

Music has to happen, Rochelle says, “or else you deteriorate inside.”

The group, which released its self-titled debut in April, boasts a sound that reflects the primal, organic nature of their instinctive artistic drive. Armed with a minimalist batch of sounds including electric nylon guitar, basic percussion and Rochelle’s uninhibited vocals, the duo deftly creates tension-soaked compositions full of menacing energy and rampant enthusiasm.

Songs like “Bitches” and “Like Eli” begin slowly, with Arabian-sounding vocal melodies swimming through watery guitar lines. Soon both songs ascend into frenzied climaxes, managing to produce palpable energy with only three sources of sound. Rochelle and Armondo agree that creating and performing this music often has its difficulties.

In larger bands, the musicians have more to hide behind, Rochelle says. But in My Gold Mask, “when I start to sing, it’s like being naked in front of someone for the first time.”

Overcoming that vulnerability has been one of the duo’s biggest obstacles, but Armondo and Rochelle crave challenges. When they started My Gold Mask last September, Rochelle has never played drums before. Now she plays them standing up while singing.

“It’s super challenging, which I think is the most fun about it,” says Rochelle, who has an appetite for new languages as well as new instruments.

But to fully understand how these two generate such powerful music out of so little, one has to experience them in person. The musicians complement each other perfectly on stage. While Armondo steadily picks vibrant melodies from his rather unorthodox guitar, Rochelle fiercely beats a tom drum as if she was trying to resuscitate a loved one.

The band is currently writing new material, and plans to release individual songs sporadically in the near future.

“Right now this is a creative challenge for us, and we’re enjoying it,” Armondo says. “As long as it feels that way for us we’ll be doing it.” (Josh Kraus)