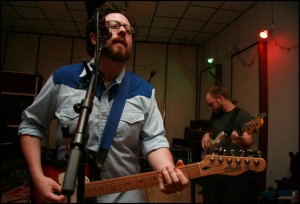 Everybody sick of hearing about Michael Jackson? How about hearing the songs, over and over again, or the images from his videos on endless loop on television, or the sights of hipsters on the streets sporting one white glove? How about the death exhaustion, the “Who is Farrah Fawcett?” inquiries from the younger generation, the terrible coincidence of Billy Mays, the horrible jokes that have already surfaced with punchlines that include making young boys “beat it” and “Patrick Swayze.”

A friend of mine who works at one the few independent record stores left in the city told me that all the Michael Jackson merchandise the store carried sold out very, very quickly; makes sense, given this cultural obsession with death. Another friend, immediately after Michael Jackson’s death, basically shrugged. I took some offense and defended Jackson’s catalogue; a day later I reconsidered, questioning if we really wanted to see the horror show of Michael Jackson’s existence get any worse. A different perspective came when I overheard a stranger say, “Ehhh, he was probably a pervert anyway.”

MSNBC replayed that famous documentary from a handful of years back that “exposed” the “real” Michael Jackson, handling his children, go-cart racing at his Neverland Ranch and all sorts of other weird shit. But there was this moment when Jackson was asked where his musical ideas originate, or how he invents his dance moves, and while Jackson couldn’t quite articulate an answer there was a moment of footage that showed him improvising some steps to a beat, and just his movement was hypnotizing. (Another moment showed Jackson vocally mimicking the bass line to “Billie Jean,” and it was really cool.) Most could agree that Jackson’s first few solo records are incredible, so maybe the real tragedy of all this is that no one ever really bothered to inquire where he got his inspiration from, no one explored his creative process. Everyone was so immersed in the did-he-or-didn’t-he OJ-era Clinton-cigar sideshow clusterfuck that was the 1990s no one ever thought to ask Michael Jackson how he wrote his songs.

I’d be quick to pull off a “and now we’ll never know” for effect, but who can tell what information will surface now that he’s gone and we live in an era when TMZ gets the first scoop and breaks the news that the cultural icon of a generation is dead.

Chicago Spazz
In 2005 local musician Adam Fitz (pictured) released a fine record called “Between the Incident and the Event,” an honest and often intimate blend of soul, rock and folk. Mostly ballads, Fitz’s aggressive voice blew some preconceived notions out the window; it seems the crunchier and gritty he became, the more affective the songs were. An impressive feat for a guy who probably can’t sing all that well, Fitz made a melodic, powerful record with rock songs that are mostly led by his vocals.

Now he’s back with “Spazz Ballads & Friendly Fire,” a live record he and his band recorded at Wall to Wall back in 2007. On July 8, he celebrates the record’s release, an event held up for so long because it took time for him to find an appropriate mix that was satisfactory. An album of covers, Fitz offers his interpretations of Mirah’s “La Familia,” M. Ward’s “Fool Says” and Velvet Underground’s “I Found a Reason,” among others. It sounds like a fun show and makes for a good live record—Fitz is backed by horns, organ, keys and everything else that makes a reasonable live band whose soul is on its sleeve.

“I was trying to reinvent tunes by people I love,” Fitz says. “It seems weird to make a studio album of covers—it’s definitely a live thing. When I sit down and write, I tend to lean towards balladry, and it’s hard to get people to come out regularly to listen to you sing sad songs.”

Fitz, who grew up on the South Side, booked two shows in one night at Wall to Wall, and played mostly in front of family and friends. But, obviously, the success of the recording was fully dependent on the strength of the performance. “The way this was recorded,” Fitz says, “everything bled, so I had no ability to go back and amend anything. It was kind of just like, the lesser of evils. ‘Oh, I like my performance on that one, but the guitar is better on the second set.’ We ended up with those ten tunes [on the album], and I think it’s a pretty good representation.”

The band is already at work on its second studio record; you should expect to hear some songs from the work-in-progress at the show, along with only a handful of the live cuts from the new record. “By the time you’re done with it,” Fitz says, “you’re sick of the songs.”