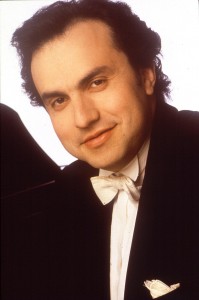 The Chicago Symphony summer season at Ravinia has been starting later and later as the CSO downtown season has gradually been expanded further into June (the season used to end in May), this year scheduling its three-week Dvorak Festival to coincide with the American Symphony Orchestra League convention. This has meant that Ravinia has had to count on pop acts and recitals to fill in more than a third of its schedule before the CSO was able to begin its Ravinia residency this year.  The centerpiece of the CSO’s opening night at Ravinia is the Brahms Second Piano Concerto, which many consider the most important work ever written in the genre. Russian-Israeli pianist Yefim Bronfman will be the soloist; it was Bronfman who introduced the “Steadfast Tin Soldier” animated segment in Disney’s “Fantasia 2000” and whose memorable performance of the opening movement of the Shostakovich First Piano Concerto with former Ravinia music director James Levine and the CSO was used in the film.  The Mendelssohn bicentennial will be celebrated with a rare performance of his exuberant First Symphony, a youthful work written when the composer was a mere fifteen years old, a year before writing his popular Octet, and two years before writing his famous “A Midsummer Night’s Dream” Overture.  James Conlon conducts.  (Dennis Polkow)