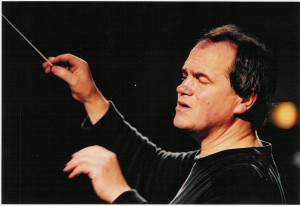 Grant Park Orchestra principal conductor Carlos Kalmar admits that, despite his being born of Austrian parents in Uruguay, the symphonies of Viennese composer Anton Bruckner do not speak to him. Kalmar has enormous affinity with Wagner and Mahler, but not Bruckner, a situation that is not unusual.  Former Ravinia music director James Levine made his mark conducting Mahler symphonies, works that he had known since he was a teenager, but has never touched Bruckner, whose works he once described to me as “incomprehensible.” Curiously, the situation sometimes works in reverse: former Chicago Symphony music director Daniel Barenboim has been conducting the symphonies of Bruckner since he was in his early twenties—even performing and recording a complete CSO Bruckner cycle here in the 1970s—but did not touch Mahler until he arrived as music director, long holding the view of his mentor Wilhelm Furtwangler that Mahler was a hack and a “collage” composer. As for Kalmar, his lack of enthusiasm for Bruckner has meant that his grandiose symphonies have remained virtually unheard during his ten seasons as GPO principal conductor, a situation that is being rectified this week when Austrian conductor Hans Graf comes to the podium to conduct the Bruckner Fourth Symphony, the “Romantic,” the most popular and the shortest of Bruckner’s early symphonies.  As Kalmar puts it, growing up in Vienna, Graf “lives and breathes this stuff.”  Opening the program is Mozart’s Overture to “The Magic Flute,” which should prove a glorious souvenir of Graf’s longtime tenure as music director of Salzburg’s Mozarteum Orchestra.  (Dennis Polkow)