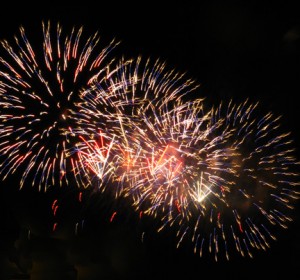 Fourth of July fireworks in downtown Chicago have a relatively recent history, since various neighborhoods had developed their own displays and traditions. The American Legion began staging its own fireworks in Soldier Field back in the 1930s, and the City respected that tradition by not competing with it with the exception of 1976, when a large-scale, one-time-only July Fourth fireworks display was organized to celebrate the bicentennial. That event was such a success that an annual downtown fireworks display was contemplated, although July Third—Independence Day Eve—was chosen so as not to compete with the Legion fireworks which, ironically, would become so overshadowed by the July Third fireworks that they would cease from lack of interest. Taking a cue from the best bicentennial fireworks displays across the country (Philadelphia, Washington, D.C. and Boston) that had spectacularly choreographed the pyrotechnics to a live symphony orchestra, the Grant Park Orchestra was engaged to perform a concert leading up to and during the fireworks, a tradition that continued unbroken for thirty-plus years, until now. Choreographing fireworks to live music has always been a very expensive and elaborate process (conductors control tempo and their cues have to be televised live to the pyrotechnicians), and the city had fought for years to cut back and even eliminate the role of the GPO altogether so that a less expensive, fully-computerized display pre-programmed to canned music could be presented. Audiences wouldn’t know the difference, officials had long theorized, and besides, pop music could be included. And so, after a live patriotic-themed band concert by the Arlington Heights-based 85th Army Band (made up of forty Army reservists from 18 to 60 that practice once a month and usually perform at retirement homes) which will stop playing at 8:45pm, a canned version of Tchaikovsky’s “1812” Overture—not by the GPO or even the Chicago Symphony Orchestra, but by the Boston Pops, to add insult to injury—will inaugurate the fireworks at 9pm followed by music of Neil Diamond, Kid Rock, Pink, Chicago, KT Tunstall, Tom Petty, Kevin Rudolf, John Mellencamp, Coldplay, U2, Bruce Springsteen, the Blues Brothers and George Michael. For those who want to hear the GPO perform a live “1812” and other American music that in the past would have accompanied this display, that opportunity comes at 1:30pm in the afternoon the following day, yes, the Fourth of July, and yes, without fireworks. (Dennis Polkow)