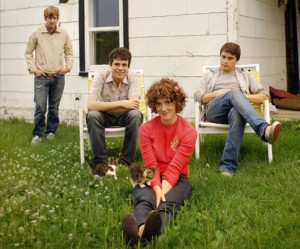 At this point, it may be difficult to distinguish which Canadian indie-rock projects merit attention, seeing as there are countless side projects stemming from the members of Wolf Parade and The New Pornographers alone. But Wolf Parade frontman Spencer Krug’s most prolific side project, Sunset Rubdown, is an essential listen. The band’s 2007 release, “Random Spirit Lover,” brought exquisite, layered arrangements and persistent Medieval images, a formula furthered in its newest record, “Dragonslayer,” which could very well be the lavish musical sequel to Beowulf. Even though “Dragonslayer” stands as Krug’s most accessible songwriting yet, it still requires a helluva lot of attention to catch every intricate instrumental ornament, or to memorize every movement in a single song. Packing forty-eight minutes into eight tracks, “Dragonslayer” forcibly demands to be consumed as a complete album rather than eight autonomous tracks, and Krug’s antiquated motifs—like the recurring dragons, palaces and sorcerers—further solidifies the record as an epic and daunting album to tackle, but the type that seems more impressive after each listen. Give it a couple of spins, and in the meantime, expect to see Krug and Colin Meloy at your local Renaissance Faire. (Andy Seifert)