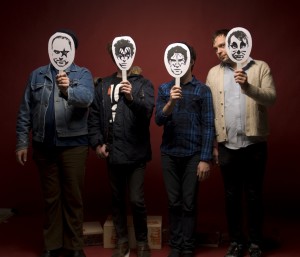 The most memorable element of Mannequin Men’s 2007 record “Fresh Rot” was its harshness. With a singer who couldn’t really sing and a backing band that stumbled and flailed through grimy garage-punk, the band’s sound put you, and a whole lot of beer, through a mind-warping blender. And that had its charms.

One of the songs from that record, buried relatively deep, was an out-of-place pop song called “22nd Century,” which actually featured a melodic hook and singer Kevin Richard basically in key. The song stuck out like a sore thumb—when I spoke with Richard in 2007 about “Fresh Rot,” he told me the band was nervous about including it on the record since it was so different from the other, more scrappy material—but showed a dexterity that wouldn’t have otherwise come through.

Two years later, Mannequin Men offer “Lose Your Illusion, Too” (Flameshovel), a title that’s obviously a giggling play on the classic Guns ‘n’ Roses record. The group’s best effort to date, it features a band challenging itself to venture outside its angry, booze-soaked comfort zone and into a more vulnerable realm. More melodic than in the band’s two previous efforts, “Lose Your Illusion, Too” actually has some catchy hooks made even more powerful by Richard’s improved vocal prowess. It ain’t pretty, but it sure is something. “Massage,” with its jangly guitars and basement-show swagger, could be the band’s best song overall. (The “Do you want a massage? Do you want a? Do you want a?” hook sinks in pretty quickly.) On “Kinda Babes,” the band goes even softer, using an acoustic guitar for a short and sweet sort-of ballad that works the way Tobin Sprout’s GBV contributions once did. With “Lose Your Illusion, Too,” Mannequin Men, quite simply, have gotten better.

“We didn’t want to make another punk-rockish record, we wanted to expand a little bit,” Richard says. “We were feeling a little, not pigeonholed, but still a little…we didn’t want to run the same race again. We’re also getting older, so…”

We’re all getting older.

“And, yeah, that sucks, but it’s the reality of the situation. And the fact is, like, we couldn’t really play before. I never sang in a band before. I never thought about that, I was still focused on being able to sing and play.”

So is it a type of newfound maturity? “We’re definitely immature,” Richard says. “So I don’t know how that flies. But we’re maturing as friends and as a band.”

The subject matter of Richard’s songs changed as well. “I tried to write less songs about my life,” he says. “[This record] is more about other things, where a lot of the songs written previously were about girls or shit I was pissed off about. That still finds its way on this record, those are the songs I always loved growing up.”

Over the last couple years the band has developed a live-show reputation as being gritty, sloppy, immersed in the moment, dirty, drunk. It fits. “[There’s] definitely a fuck-it attitude,” Richard says. “We want to have fun, and that translates best in a live situation. If we were worrying about every guitar harmony we’d look like fools… It’s a party, we drink a bunch and forget the parts.”

Not that Mannequin Men is merely a party band. Many critics have invoked The Replacements, which you could see on the surface. “That’s kind of bullshit, people have to write something so they go with what they know,” Richard says. “I mean if that’s all that people get out of it it’s a bummer, but as long as they have a good time, I don’t give a shit. I like to think we’re above that, but there’s worse things to be called.”

Richard is quick to mention the familial nature of the band, a brotherly union of sorts that makes the being-in-the-band process much smoother. “It’s totally collaborative,” Richard says of the songwriting process. “It’s definitely a four-man effort. I don’t think I could be in a band with anyone else. Every time I start a side project, just to screw around, I always end up pulling those boys in. They’re my best friends. It’s like, I wouldn’t want to be in a songwriter band and shit like that. I wouldn’t function in that environment anyway. I don’t think my ideas are that good either.”