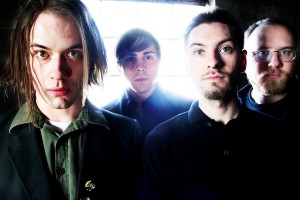 The way that Ernest Lohrer, bass player and keyboardist for Unique Chique, describes the band’s sonic evolution is like a story that is right in the middle of the best, most tense chapter. According to Lohrer, the band’s first record was simply guitars, keys, drums and vocals, the way that many bands’ stories begin, and with the second release, they changed things slightly by removing most of the keys and adding strings in those places. “There was always a predisposition to not use much distortion,” says Lohrer.

After seven years of work, that predisposition is now gone, and things sound like they are about to get even more interesting. “With our new stuff, we’re dirtier,” says Lohrer. “There’s more electronic sounds happening and more experimentation with everybody playing different instruments. The newer stuff we’ve been coming up with has been a bit more complex in terms of arrangement and instrumentation.”

According to Lohrer, mastery of their specific instruments has always been extremely important to the band’s dynamic. “We’re all music teachers and very serious about our musicianship. As a result we’re always trying to better ourselves as musicians and as writers.”

With the support of two independent labels, Loose Tooth Records and Alarm Clock Records, Unique Chique is prepared to embark on recording and releasing more records and touring in the near future. “We love having the chance to play for people that wouldn’t otherwise have the chance to see us,” says Lohrer. “We’ve made a lot of friends in different towns that we’d never been to before. That interaction is great. So is having the opportunity to see different places and things that we haven’t seen before.”

According to Lohrer, the band is “always at work on the next record,” and hopes to have something new ready to release by this coming fall. (Todd Miller)