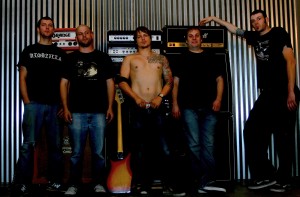 One major theme throughout much of what Imperial Battlesnake produces is a sort of Midwestern toughness. The band’s latest full-length record, “Sentinels of the Hardland,” is even a direct reflection of this principle in its title. “Hardland is a take on the word heartland,” says Wes Nile, vocalist for Imperial Battlesnake. “We live in a gigantic flatland. We’re beaten by the heat in the summertime and we’re beaten by the cold in the wintertime. We really are defined by our environment.” Nile then goes on to explain the correlation between the band’s music and the sometimes brutally harsh region in which the band lives and creates music. “In the bitter, hard ground, the seeds have to be tougher to grow and when the tough seeds grow, they sprout up tough plants. We are those tough plants and this is the music that comes from the foliage that comes out of the bitter ground.”

Imperial Battlesnake then backs up these tall words and bring the toughness with what Nile describes as a kind of “classic metal.” He attributes influence from bands came out of the 1980s, bands like Metallica, Judas Priest, Iron Maiden and even Black Flag. This era’s influence is clearly evident in the band’s fast, driving, guitar-solo-stacked brand of metal.

When asked about how the band achieves that “classic” sound, Nile cites the fact that all Imperial Battlesnake songs begin with the drums and the bass, giving the guitar and vocals a sort of platform to build on top of. “When the songs are constructed around the tempo and the actual beat itself, everybody kind of knows where they fit in. It’s a little bit more metric without being overly angular or mathematic.”

More reminiscent of those legendary eighties bands than the keyed-in rhythm section or the solos, in my opinion, are the vocals. Nile’s vocal performances on the songs are what take me back in time. He shows range, making it fairly high on the scale at times. He doesn’t use the roar or growl that has become typical the typical vocal formula in a lot modern metal as a crutch. He sings, extremely hard at times, but he’s always singing nonetheless.

On Thursday, the band will join Crustacean Records label mates Bloodcow and The Von Ehrics at Quenchers as part of a four-day, traveling fifteen-year anniversary celebration for Crustacean Records that, in all, will make stops all around the Midwest in Chicago, Madison, Oshkosh, Milwaukee, Minneapolis and St. Paul. In addition to the show at Quenchers, Imperial Battlesnake will make appearances at the anniversary shows in Madison on Friday and Oshkosh on Saturday. (Todd Miller)