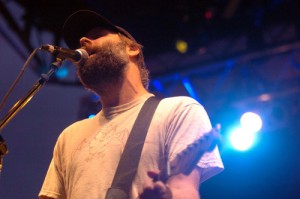 Amidst rumors that Chicago’s rock poet Thax Douglas has passed, the Pitchfork Music Festival got underway. The first band, Tortoise, dedicated its set to the lit figure

The Chicago post-rock quintet played a solid show, if a little short. Dipping into its past catalogue—including one song from “TNT,” as introduced by percussionist John Herndon—the influential instrumental group was consistent as usual, a decent opener for a whole overwhelming weekend.

New Jersey’s indie-rock mainstays Yo La Tengo played next, mixing in older songs like “Tom Courtenay,” “Stockholm Syndrome” and closer “Sugarcube” with newer material, like “Mr. Tough” and a brand new song from its upcoming new record. The show was a bit of a disappointment for its lack of the epic song “Blue Line Swinger”—a song I would’ve bet my life on the fans would’ve voted for as part of tonight’s “Write the Night” feature—and an overall dimness of the trio’s presentation. Leader Ira Kaplan’s guitar freakouts still raise some goosebumps, though.

The Jesus Lizard played the set of the evening, probably the set of the whole fest. I honestly can’t see any band topping it. Within thirty seconds of the show’s start—after David Yow told the cheering audience to “shut up”—he was crowd-surfing and singing, as if it was 1990 again. The crowd dug it; the pit started immediately, and while I overheard one fan claim that it was “a bunch of pussies in there, they don’t know anything,” it certainly seemed energized. Yow even told some off-color jokes, such as “Why did the guy lick his asshole? Because he liked the taste of my semen.” Glad to see the man hasn’t changed much with age. Yow announced the band is playing a couple shows at Metro in November, which by the looks of it will be absolutely batshit crazy.

Built to Spill closed the night with a set of fan favorites, including “Kicked It in the Sun,” “Big Dipper,” “Carry the Zero,” “Strange,” “Goin Against Your Mind” and, my favorite of the evening, Halo Benders’ “Virginia Reel Around the Fountain.” Doug Martsch’s guitarwork was as crisp as ever, cutting through the windy, drizzly, too-cold-for-July atmosphere with a sharp ease. His voice was good, too. Noticeably absent from the set was “Car,” from the “There’s Nothing Wrong with Love” record; so much so someone in a group near me said “there’s no way these people didn’t vote for ‘Car,’ everyone loves that song.” Still, no dice.

Bathroom lines were long…beer lines seemed much longer…hopefully some logistics will be figured out by tomorrow. (The opening of the third stage area will help dilute some of the crowd, I imagine.) Overall, a good start to the weekend despite the chilly weather.

Anyway I just ordered a pizza and it should be here any minute. Alright!