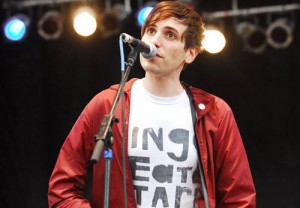 The threat of heavier rain still looms, but the drizzling has stopped. It looks like we might not have a repeat of the crazed mud people like we did last year.

The Pains of Being Pure at Heart played a charming, surprisingly strong set of its fuzzy pop, making an even stronger case for its self-titled debut as being one of the best records recently released. (A new song the band played showed promise for the future as well.) Apparently the band received some “advice” from Fucked Up’s Pink Eyes backstage—to sound more like Weezer. The band “agrees.” The boy-girl dual harmonies that cut through the guitar-keyboard attack keep you from ragging on the silly moniker…this band really sounds as it should.

There are a lot of babies in the crowd wearing mini protective headphones, which is simultaneously infuriating and super-cute…ironic t-shirts abound, of course…

In case you’re wondering, I just ate a cheeseburger and really want to nap. (Tom Lynch)