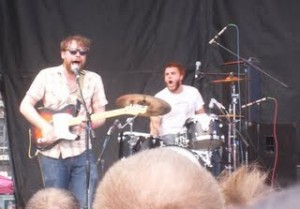 Last night’s set by The National still has me on a high.

I was skeptical the band could play the explosive, deeply affecting show that its certainly capable of—the only time I caught the Brooklyn indie-rock act before was during its less-than-thrilling Lollapalooza set last year—but closing Saturday night at Pitchfork, the band was better than I could’ve ever expected. Playing mostly from 2007’s stunning “Boxer”—but mixing in choice cuts from predecessor “Alligator”—The National was more rocking live than it is on record, and made it clear that the group’s become one of America’s premier live rock acts, showing improvisational invention and captivating the crowd for more than an hour. My favorite moments were when the band unearthed “Alligator” deep cut “All the Wine” and set closer “About Today,” a ten-minute somber jam from EP “Cherry Tree.” This may have been the best night-closing-act in the Pitchfork fest’s history—yes, maybe even better than when Sonic Youth did all of “Daydream Nation.” (I was transfixed enough to where I completely skipped The Black Lips, playing on the alternate stage.)

On a bad note: the bathroom situation was unacceptable. Endless lines and repulsive Porta Potties made for, well, an undesirable experience. Wouldn’t it be better to have more toilets than you need? Safer than sorry, kind of thing?

I overslept and missed Michael Columbia and most of The Mae Shi. Sue me. Scotland heartache rockers Frightened Rabbit played a powerful, scrappy set, choosing cuts from last year’s “The Midnight Organ Fight” and debut record “The Greys.” Lead singer and guitarist Scott Hutchison howled and crooned in his emotive, hoarse way; an excellent band proved it deserves the acclaim it usually receives.

Blitzen Trapper was next, which offered its brand of folksy art-pop. People dig this ensemble, but mostly I’m just bored and turned-off by its jam-band-like essence.

Local cats The Killer Whales played the smaller stage—mostly shirtless—and the two-drummer assault impressed, despite of the constant falsetto “singing” by its two frontmen.

Here’s a note on the overall sound of the fest—it’s way too quiet. You can hear the crowd’s chatter over the music without straining, so unless you’re crammed up against the stage, it’s merely background music. Maybe next year put speakers that channel the sound all throughout the park?

Today there seems to be an abundant amount of overweight men in flip-flops who want to accidentally stick their dirty, gross feet in my face. My patience is thinning.