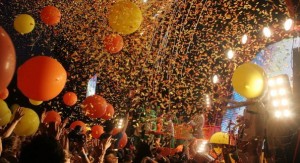 The late-day acts on Sunday night at Pitchfork proved why this music festival, with its ambition and inventiveness in booking acts, is the best in the city.

The Walkmen raged on at an unwavering pitch; the Strokes-meets-Velvet Underground jangliness may be annoying to some, but to me it represents a new hybrid of NYC slickness.

France’s Anthony Gonzalez and his illustrious M83 pummeled the crowd with invigorating beats and waves of synths and shoegazer guitars, plus the wash of the heavily reverbed boy-girl vocals and thunderous live drumming. Choosing mostly tracks from 2008’s record of the year, “Saturdays = Youth,” the trio was one of the weekend’s highlights. Meanwhile, NYC’s trio Vivian Girls brought some aggressive, unfurled garage pop to the tiny stage, proving their strength as a gritty, charming group.

Mew captivated some on the small stage, but this mix of shoegazer rock and electro glam is best served in a club. (I saw them at Metro a couple years ago and was astonished by the band’s skill.)

The Flaming Lips were up to their usual tricks—the confetti, the balloons, the giant bubble Wayne Coyne rolls inside, spinning over the crowd—and a lot of the same hits, playing “Race for the Prize,” “She Don’t Use Jelly,” “Do You Realize?” and others. While that was all fine and good, the real party was on the little stage, where simultaneously The Very Best offered its mashing of African pop and dance. The band was competing against Wayne Coyne and crew, so the audience was thin, but man was it a dance party. The group’s set—led by DJ/producer Radioclit—even ended with a tribute to Michael Jackson, which sent the crowd away rejuvenated. Those who missed The Very Best—and there were A LOT who did miss them—simply didn’t have as good a time this weekend as I did.

Put it all together and it was a pretty amazing, relatively problem-free weekend which offered an array of powerful performances. There are things the fest needs to improve, like the Porta-Potty situation and the sound system. (For the last time, turn up the volume!) They would greatly benefit from putting speakers in the baseball fields, as it would greatly help the sound reach the back of the crowd.

Best of the fest? The Jesus Lizard, Fucked Up, The National, The Pains of Being Pure at Heart, Frightened Rabbit, M83, The Very Best. (Tom Lynch)