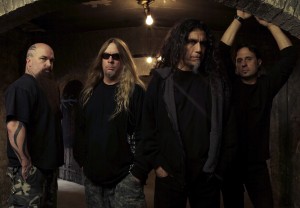 Summer is the season when legions of trucks hit the roads bringing dozens and dozens of bands in touring festivals to every major city across the country. This year’s biggest metal smorgasbord is the Rockstar Mayhem Festival, with co-headliner’s Marilyn Manson and Slayer leading the pack with some of the world’s most heavy-hitting outfits in tow. The madness comes to Chicago this summer as the carnival of brutality descends on the First Midwest Bank Amphitheatre on July 26.

Undisputed masters of thrash metal, Slayer, who have spent the past quarter century defining the true nature of the genre of which hundreds of bands have followed in their wake, co-headline. Guitarist Kerry King says he’s excited about being on the bill with Manson for a second year in a row.

“We co-headlined with Manson once before, a couple years ago,” King says. “So, we all know what we’re getting into. Manson and I probably drank a little too much absinthe on that tour, but we had a really good time hanging out and playing good music. We’re looking forward to doing the same this summer on Mayhem.”

Slayer frontman and bassist Tom Araya also expresses his enthusiasm about the festival tour and for him it is a chance to make the Mayhem a family affair.

“Yeah, actually that’s going to be good,” Araya says. “You know, it’s going to be a fun summer tour. I’m going to have my family out with me so it’s going to be fun. You know, we play an hour, which really doesn’t allow for too much, you know what I mean, so we have to seriously decide what songs to play. It doesn’t give you a lot to do as far as stage time. But you know, summer run, it’s going to be a fun festival. The bands that are playing are really good bands. It’s a good show and I think people are going to get their money’s worth.”

Slayer has also been in the studio this past year working on its eleventh studio offering, which is currently untitled, but according to Araya it will be released some time before year’s end. “Psychopathy Red” was a preview single of the new album that was released earlier this year and flew off the racks on its debut day. Araya expresses great satisfaction with the new material, which takes the band back to the earlier, heavier, lightning-fast moments of which the band made their bones.

“I got nine songs that are mixed and sound amazing,” Araya says. “It’s going to be awesome. It’s really, really good. It’s Slayer. It’s everything you want to hear Slayer do.”

After twenty-five years of touring the world countless times, millions upon millions of sold records and nods from the industry with two Grammy wins, Araya says that performing for the fans is still the most rewarding part of continuing the Slayer legacy.

Returning to Chicago, as in many cities across the country, brings out the diehard fans who never miss a Slayer event. These dedicated disciples make the shows whenever the band hits town and Araya says it’s amazing how he recognizes the same people in each city.

“It is crazy,” he says. “We’d done in-stores and stuff and a few were where you get a proud father with a baby and then the next time you see him, the baby’s grown, with their own baby. Yeah, it is crazy and pretty neat to see and you can see it out in the audience too. Faces. And then the fans are so loyal that whenever you play any certain cities you recognize faces. You know you’ve been seeing the same faces for the past twenty-five years, so it’s kind of neat when you’re like looking at the audience and you’re like, ‘Dude! I recognize you!’ and they know you recognize them. It’s kind of cool.”