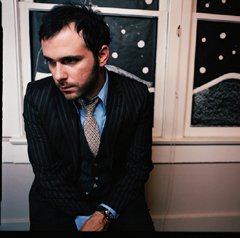 After enjoying moderate success with the Southern California-based band Shillglen until 2001, Greg Laswell launched his solo career as a singer-songwriter in 2003 with the independently released “Good Movie,” which ultimately won a Best Local Recording award at the San Diego Music Awards the following year. An acoustic balladeer with a strong folk-rock influence, Laswell has successfully placed his music on TV shows like CW’s “90210” and CBS’ “Without a Trace.” His subtle cover of “Girls Just Wanna Have Fun” was heard on the soundtrack of “Confessions of a Shopaholic,” while “Come Undone” (no relation to the Duran Duran hit of the same name) has been featured on the trailer for the upcoming feature film “Veronika Decides to Die,” an adaptation of a novel by Brazilian novelist Paulo Coelho. Laswell has been compared to the work of Jeff Buckley and Radiohead due to the personal nature of his lyrics and also the general emo feel of tunes like “Come and Go” and “Off I Go.”(Ernest Barteldes)