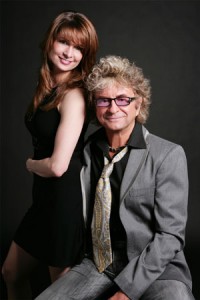 If the name Jim Peterik doesn’t ring a bell, his music certainly will: the longtime Chicago native and composer of such platinum hits as “Vehicle,” “Eye of the Tiger” for “Rocky III” and “The Search Is Over,” among others, who has had eighteen top-ten hits for classic groups that he founded such as the Ides of March and Survivor along with countless other groups, artists and advertising campaigns, Peterik is so much the gold standard of the songwriting industry that he was asked to write “Songwriting for Dummies.” As a rock guitarist and keyboard player, Peterik is no less dangerous, and despite writing music for all voice types, his own raspy, growling, bluesy vocalizing is one of a kind (that’s him singing “Vehicle,” including its famous break, “Great God in heaven you know I looovve you”). Peterik has written songs of every conceivable style, even country hits, but his latest project, Jim Peterik’s Lifeforce, labels itself “Smooth Jazz That Rocks,” an oxymoron if ever there was one. Peterik’s music has always had a jazz and R&B quality to it, but with an edge; with Lifeforce, things are deliberately toned down and acoustic instruments and jazz grooves predominate, but Peterik’s unique gift for melody and uncanny improvisational skills are still very much in evidence. And while it’s fun to hear Peterik reconfigure his own rock standards with a jazz sensibility, it is the new music that he wrote for the group—much of it instrumental—that is the most tantalizing of the project. Peterik’s Lifeforce includes Ed Breckenfeld on drums, Mike Aquino and Peterik on guitar, Klem Hayes on bass, Christian Cullen, Scott May, Jeff Lantz and Peterik on keyboards, Steve Eisen on sax and flute and vocalist Lisa McClowry. (Dennis Polkow)