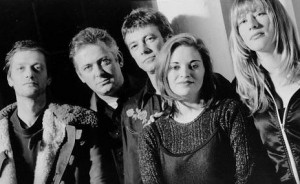 Can any band match the eclectic resume of Jon Langford, Tom Greenhalgh and the rest of British post-punk vets The Mekons? They’ve mastered the role of cheeky punks, delved into country and folk (and have even received a few “godfathers of alt-country” votes for 1985’s “Fear and Whiskey”) and cleverly wielded humor and politics into a thirty-year catalogue, all after contributing to the late-seventies new-wave Brit-punk movement. Since 1977, The Mekons have released seventeen albums (most of them ridiculously titled, like “Pussy, King of the Pirates” or “The Mekons Honky Tonkin’”), but “Fear and Whiskey” has rightfully been considered the cream of a pretty damn good crop. These anarchists effectively claimed back a piece of country music for the (extreme) left, wrestling away what had become a right-wing dominated genre while reforming their sound by blending punk impudence with fiddles and slide guitar. The Mekons may not be as self-destructive as The Pistols or possess the rebellious reputation of The Clash, but, unlike those two bands, these guys have been together (and stayed alive) for thirty years. (Andy Seifert)