by Tomnewcity
August 4, 2009Filed under: 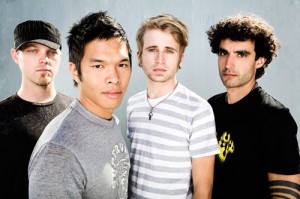 Through relentless touring, the West Coast-based hip-hop/glitch surgeons known as the Glitch Mob have found a place in the tight spaces of many music-loving hearts. Virtually unknown in Chicago a few years back, this will now be at least the third or fourth appearance in Chicago over the last twelve months. And even in the city raised by house, they’ve grown a sizable following of hip-hop heads, dubstep wobble-seekers and even house/techno types looking for a fun change of pace. The Glitch Mob even managed to impress the notoriously jaded DEMF fans in May, winning over the techno-heavy masses of Detroit with their energetic live show which features all four members weaving in elements behind laptops, hands in the air, faces reflecting the sound and the fury… (Actually, Glitch Mob member Kraddy has recently departed, amicably citing “creative differences,” leaving Ooah, Boreta and edIT’s performance to be their first in Chicago as a trio). For those of you Lolla weekenders still out there havin’ it but wallet-whipped by three hard days/nights of festival life, or maybe for those of you who couldn’t afford to see the Glitch Mob perform at Lollapalooza, tonight’s show is free of charge and also features one of our favorites in the ever-versatile and unpredictable Striz, along with Phaded. (Duke Shin)