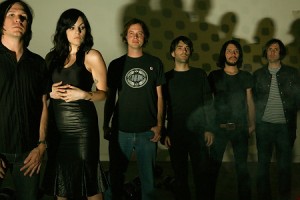 Mining the well-paved intersection of Velvet Underground, My Bloody Valentine and heady Krautrock might leave a band vulnerable to criticism. And after all, if your band is named for the Grateful Dead’s former moniker during the Ken Kesey acid-test era, then yeah, prepare for scrutiny. But the not-so-merry pranksters in The Warlocks have managed to use their muscular seven-piece sound to greatly vary the concentrations of their sonic makeup, from feedback noise freakouts to shoegazer dense tapestries and even straightforward psyche-pop rockouts—or at least, as straightforward as psychedelic music can be. Their latest effort, “The Mirror Explodes,” is heavy on the heavy, with moments of clarity occurring through the fuzz, empowered by Bobby Hecksher’s pleading voice as just another layer of sound. Also on the bill are fellow psychonauts The Morning After Girls, who take a more melodic approach supporting their latest Alan Moulder-kissed LP “Alone,” which dips closer to the pretty mess of Curve than previous tour-mates and Warlocks’ associates like Black Rebel Motorcycle Club and The Brian Jonestown Massacre. And if you make it out early enough, maybe LA-based openers Gliss will salute you with their excellent take on Smashing Pumpkins’ “Rhinoceros.” (Duke Shin)