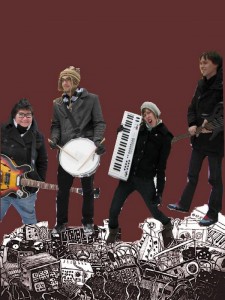 There is a band residing in Pilsen that possesses the enthusiastic bustle of The Black Lips and the emphatic female growl of Yeah Yeah Yeahs. Its members are in love with T.S. Elliot and think “Twin Peaks” marathons are the shit.  Their name is Bird Talk, and they want to make your ass shake.

The band formed two years ago, and has since been producing danceable garage-pop that will incite your limbs to spasm in rhythmic glee.  Its members include guitarist and vocalist Melissa “Jumpy” Marquez, drummer  Shimby McCreery, bassist Jacco Kuipers and Emily Engelhard on keys and vocals.  In May of 2007, Marquez and McCreery found each other via Craigslist.

“We tried playing with several different people over the span of a couple of months before finally asking Emily to join us on keyboards,” says Marquez.  “Jacco later joined the band in November of 2008 just before we recorded our debut album.”

“No Bird Left Behind,” Bird Talk’s debut, was released on April 1 of this year.  It contains ten songs loaded with oomph and manic exuberance.  It was also recorded in Bird Talk’s kitchen.

“The radiator in the living room is prominently featured on many of the tracks,” says Marquez.

“Crown and Coke (Do It! Do It!)” may be the group’s most well-known tune.  Driven by a snarling four-note bass line and a steady, but hard-hitting drum beat, this is Bird Talk’s sublimely catchy anthem.  Englehard takes the vocal lead on this one, singing about taking you out to eat and rubbing your feet as the band corks off each sentence with a fanatic cry of “Do it do it.”  As the verse crumbles into a chorus, bubbly synth notes begin to oscillate, momentarily placating the chaotic momentum of the bass and drum combo before more shouts of “Do it do it” can carry the song back to its heady frenzy.  If you don’t bob your head to this song you don’t have a pulse.

“We’re the kind of band that knows the exact speed of sound and which frequencies will hit your eardrums in just the right way… to make your ass shake,” says Marquez.

Another ass-shaking song is “Winter In A Cave,” which opens with an energetic ten-to-one countdown before radiant guitar chords and cheerful keyboard notes swoop in.  The structure is simple, and so is the instrumentation, but vocalist Marquez injects such strain and personality into every line she utters that no matter what is occurring musically, she is always fascinating to listen to.  In fact, this ticking time bomb sound quality is present in most of Bird Talk’s material.

“We have to let the sounds and voices we hear in our heads out before it’s too late,” says Marquez.

Although unsigned, Bird Talk’s album is available for purchase at birdtalk.bandcamp.com, and they even have a music video of “Crown and Coke (Do It! Do It!)” which was filmed in Pilsen. (Josh Kraus)