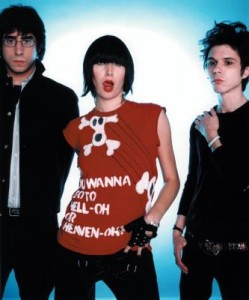 Well, the rain stopped, but it was replaced by some intense humidity and heat. A number of people were collapsing from heat stroke, and even a friend in my group hit the ground pretty hard after trying to stand up too fast. I caught a glimpse of a dude on the Blue Line heading down there chugging Jack in preparation for the fest, donning a “Vagetarian” t-shirt. Classy! Oh, and musically, Day Two kinda sucked.

I started with trio Miike Snow and transitioned right into Minnesota’s hip-hop crew Atmosphere, both of which were terrific disappointments. I think it was a scheduling problem, as Snow’s laid-back groove and Atmosphere’s agreeable work would’ve played better a little later in the day.

Los Campesinos!, the British indie-pop band, kept up the energy at the other end of the park, but it quickly became tired and humdrum, as every song basically sounds the same. The best part was the band’s cover of Pavement’s “Box Elder,” which I’m not sure anyone in the crowd other than me recognized. (Side note: what’s up with this band always covering Pavement songs?)

The countrified acoustic fingerpicking of Robert Earl Keen was low-key and sleep-inducing. I was mostly confused as to why he was booked here today anyway.

I headed over to the Kidz stage to check out who today’s “Special Guest” was going to be—I didn’t want to miss a LeAnn Rimes-type superstar!—but it was just Band of Horses, doing a shorter, more intimate set than the one the band is to play on Sunday. No matter, it was a high point of the day. Seeing the band play “Is There a Ghost” in front of a bunch of kids was rather neat.

Gomez was lackluster, as usual, even with the charming cover of Red Red Meat’s “Airstream Driver.” Coheed and Cambria offered its new emo/punk/metal crap, and while this band somehow garners acclaims and serious fandom, let me tell you, it’s dreadfully annoying. Glasvegas, the Scottish soft-rock band who followed, proved better, until the lead singer started talking about “big dicks” or something and then it was time for me to go get some food.

I caught a few Santigold songs—the hip-hop/pop songstress was impressive, but the crowd was just too overwhelming to really enjoy it, most likely waiting in anticipation for TV on the Radio’s set. (Which I missed, and I regret it, as I heard it was the best of the day.)

Sweden’s Lykke Li was pleasant enough on a smaller stage. Her sound was much bigger than I expected and got the crowd dancing in ways I would’ve never guessed. Rise Against, playing at the same time, gave a lot of love to Chicago, but let’s be honest—this band used to be way better, when it was less melodic and more ferocious. Sure, they’re a talented bunch of guys, and Tim McIlrath’s voice has really come into its own. But I miss the days when Rise Against would threaten to tear your face off.

Animal Collective, I band I’ve never liked and these days pretty much despise, offered its predictable electronic jam-band bullshit, which left casual viewers scratching their heads and devotees in euphoria. Whatever. I can go on and on how this band is pretty much worthless, and I have before, but I just don’t have the energy to do it right now. I will say this: just because you TRY to sound like the Beach Boys doesn’t mean you actually DO sound like the Beach Boys.

Ben Harper…jesus. Normally I would’ve avoided this nonsense like the plague but I was waiting for Yeah Yeah Yeahs to begin. When they did, Karen O entered the stage wearing some sort of florescent Native American head-dress and immediately kicked into a string of high-energy, crowd-pumping YYY material. Easily the best act of the day, it was cool to see this band—which replaced Beastie Boys when they had to cancel—play in front of, I’m guessing, the largest audience they’ve ever faced. It most of been terrifying and exhilarating for them, and you could see the excitement from the stage.

I headed to the other end to catch a glimpse of Tool, a prog-metal band that’s always stuck to its guns and has earned a rabid cult-like following over the years. The heaviness was there, and the general weirdness, as Maynard Keenan kept away from the crowd for most of the set, instead preferring to highlight the musical aura. It was cool, sure, but I was too tired to really get into it and headed home, where I totally had some leftover Chinese food waiting for me. (Tom Lynch)