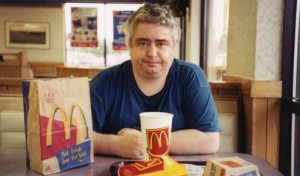 Even if you have only a rudimentary knowledge of Daniel Johnston, you’re still probably well aware of his struggle with mental illness and bipolar disorder. While such an affliction does have an impact on Johnston’s unusual underground icon status, it rarely defines his music. Johnston’s endearingly lo-fi classic, “Hi, How Are You,” and an overwhelming bulk of his cassette catalogue (frequently passed out by Johnston himself during his time the mid-1980s Austin scene) pack a punch with pure honesty and a heavy coating of appealing innocence. Johnston’s high-pitched, child-like quiver would be deemed “unlistenable” to the majority of classically trained ears, but when it’s performed in conjunction with his altruistic love of rock ‘n’ roll, it’s kind of like having a portal into the mind of your 9-year-old, just-discovered-music self. Critics have cited Johnston as only appealing to hipsters looking to take advantage of the vague profundity of his illness, and as possessing zero production values (admittedly, some of his early songs sound like they were recorded with a Talkboy), but it’s Johnston’s songwriting that’s kept him beloved, the majority of which is immensely clever and as melodically rewarding as the bands he grew up adoring. (Andy Seifert)