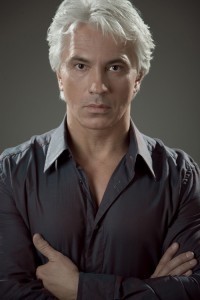 Here’s something you’re not likely to see at Lyric Opera anytime soon: Siberian baritone Dmitri Hvorostovsky as the ugly hunchback dwarf Rigoletto in Verdi’s opera of the same name.  Hvorostovsky’s matinee-idol looks won him a spot as one of People Magazine’s “50 Most Beautiful People” but in a concert version of the opera, he won’t even have to bend over while he is singing.  We haven’t seen Hvorostovsky here since his belated-but-memorable performances in Tchaikovsky’s “Eugene Onegin” at Lyric Opera a couple of seasons ago, but his rare artistry is always welcome and illuminating.  And though Verdi may not be the first thing you would associate with Hvorostovsky’s unique voice, the first role he ever did here was Germont in “La traviata.”  Cuban-American soprano Eglise Gutierrez is Gilda, Italian tenor Stefano Secco is the Duke of Mantua and James Conlon conducts the Chicago Symphony Orchestra.  In a shameful cost-cutting move on Ravinia’s part, the first-rate Chicago Symphony Chorus is being sidelined for the far-inferior amateur Apollo Chorus.  Hvorostovsky will also give a rare area recital of all-Russian repertoire with pianist Ivari Ilja on August 18 in Ravinia’s intimate Martin Theatre that includes rarely heard songs by Tchaikovsky, Rachmaninov and Nikolai Medtner. (Dennis Polkow)