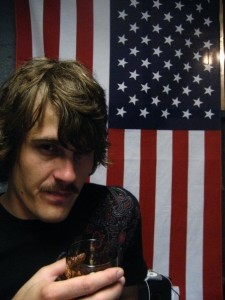 Seven years ago Shaun Paul Jones moved to Chicago from his home by the ocean in North Carolina with the intention of making people laugh through improv comedy at Second City. Having previously played in bands in North Carolina, Jones found musicians in Chicago as well. He began playing in bands and even though the comedy didn’t pan out, the music always stuck with him. But even those bands ended and then Jones found himself back at the beginning.

“In the bands that I’d been in previous to Chaperone, I’d never been the primary songwriter, I was just a secondary guitar player,” says Jones. “I was kind of looking for something to do and realized that the only way that was going to happen was if I wrote my own songs, so I pulled out an acoustic guitar and started listening to Gram Parsons.”

Jones began writing what he calls “countryish” songs and he formed a band around himself to play them. The setup is somewhat standard with guitar, bass and drums, but the element that really make these songs stand out are the strings that have been added to the recordings. They add another layer of “countryish” sadness and homesickness coming through Jones’ storytelling.

Being so far away from North Carolina—where he was raised in a religious home by parents who were both surfers—has given Jones many interesting lyrical possibilities. “I sing a lot about leaving home, going back home, home in general,” says Jones. He goes on to explain that he and Miles Doornbos, the group’s bass player, are currently writing a musical based on a modernization of the story of the prodigal son, using some preexisting Chaperone songs and writing some new ones to fill in the gaps. “It’s funny how easily it all fits together [lyrically]. It’s always been in the back of my head. So, I don’t know if it’s just in there, making itself happen, but we haven’t had to change anything from the old stuff.”

While the musical is still in its early stages, in the meantime, Chaperone is staying busy. The group will release its debut EP, “The Ghost Still Haunts,” later this month and in September, the group will head back into the studio to work on a three-song seven-inch record and then hopefully hit the road on tour later in the year. (Todd Miller)