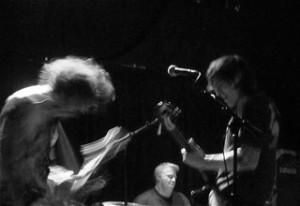 Dark Fog is the kidney, it’s the cod tongue. The band is a rarity, and a delicacy. Sure, spacey psych-rock is still alive and fighting, but the Fog is a distinct pedigree. They’re dimension-shifting. Their sound is both muddy and translucent, but never stagnant. The band members play not as themselves, but as a presence, generating one continuous sound surge that vibrates through the decades, eluding time. You need gills to breathe their oxygen, it’s that thick.

Drummer YT Robinson, guitarist/bassist Kevin Walsh and guitarist/vocalist Ray Donato make up the band as it stands today. After five years as a group and three DIY releases, the musicians still find themselves jamming together in Walsh’s three-story home and practice space.

“We are in an ideal situation where we get to play together twice a week,” says Walsh.

The practice area is massive; perfect for swirling helixes of pedal-induced fuzz to billow and swell. The band manages to produce huge waves of congruent sound despite only being a three-piece, which is almost entirely due to the musicians’ strong musical unity. They play off each other as if they had the same blood pumping through their arteries. The band makes it very clear that they have a deep connection.

Up until their last record, Fog was a four-piece, with a bassist named Jesse. But after realizing the bass playing wasn’t quite gelling with the other instruments, the band became three.

“Were a dynamic band that definitely, now that were a three-piece, relies on feeling each other out way more,” says Robinson. “That makes us so much better.”

But the group’s bond is not just musical. In 2006, each member took separate vacations, and when they returned, they discovered that all three were expecting a child. Furthermore, each baby was born at almost the same time.

“Each were born on a Sunday like a week apart,” says Donato. “I figured it had to do with our black magic.”

Now their kids show up to band practice, but usually sleep right through it. They doze through the feverish snare, cymbal and wah-guitar death-dance on “All Seeing Eye,” through the immediately catchy, but heavy vocal ascension on “Mesmerized” through the lumbering “Into the Light,” which sounds like an iceberg sinking into an electric ocean. It’s churning, heaving, gelatinous stuff that could be from an early 1970s mushroom band as easily as it could be from an outtake of a Dead C jam session.

Walsh remarks that “If there was a deaf person listening to us live, they could feel it.”

“There’s a lot of very concussive parts,” says Robinson. “You can feel the thumb of it in your chest.”

Dark Fog’s new record, titled “DFIII…thousands,” is available for mp3 download, and will soon be released on vinyl. The guys say that they have evolved musically since the band’s conception, and every new record boasts a new feeling and dynamic.