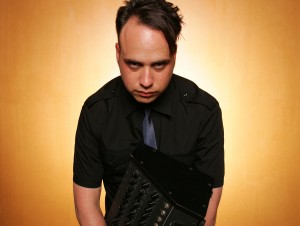 “A lot of people say ‘Music is in my blood, if I hadn’t gotten into this type of music, I would’ve gotten into something else…’ I don’t think that’s true for me… it’s not music that’s in my blood; it’s specifically electronic music. I’m obsessed with synthesizers, themselves.”

If you feel it’s been a minute since you last heard from winsome synth-pop emotionalist Solvent, you’ll have to excuse him for being a little preoccupied. Jason Amm, the man behind the Skinny Puppy-inspired moniker, has been busy, releasing an album as Black Turtleneck with fellow Toronto artist/vocalist Thomas Sinclair in 2006, closing up shop at his Suction Records imprint and playing Mr. Mom to his newborn daughter. But fans of Solvent’s distinctively melodic work will be happy to know that Amm has recently completed recording and mixing a new album, “Subject to Shift,” scheduled for a 2010 release on Ghostly International.

On this day, speaking by phone from his home, the self-professed “synth-nerd” talks of what he’s learned from his self-imposed hiatus from Solvent. “My overall lesson coming out of [Black Turtleneck] was that I should stick to doing things by myself… I had more success when I dictated everything about the project.” The success Amm has achieved with Solvent is equal parts aural synth gold and nostalgic, heartfelt lyrics—vocoded to robotic perfection. Originally discovering electronic music in the form of new-wave acts like New Order and Depeche Mode on a local Toronto radio station (the subject of Solvent’s breakout 2002 hit “My Radio”), he began buying gear and dabbling in production, all the while thinking that he’d meet his own Marc Almond (Soft Cell) or Dave Gahan (Depeche Mode) to front his band. “I never met those people,” he states matter-of-factly. So Amm considered himself a man without a viable musical future until IDM innovator/prankster Aphex Twin came along. “Once I heard that stuff I almost, for several years, didn’t want to listen to bands anymore! All I wanted to hear was synth nerds, making music by themselves. At home.”

Fast-forward to the present, where creating music alone at home is still Solvent’s raison d’etre, but of course performing live helps support Amm in releasing more Solvent music, as well as buying more synthesizers and gear. “But I do enjoy playing live,” he concedes. “I think that I have a good live act… [it’s] exactly where I fit into the musical spectrum, which is halfway between early eighties synth-pop—where you have a singer playing keyboards and things like that—versus a more techno show.”

Solvent’s performance in Chicago is a one-off date to celebrate the tenth anniversary of Ghostly International. He’s planning to perform new tracks from “Subject to Shift,” and Solvent fans will likely be impressed. Sure, there are the familiar major-keyed synth melodies and doses of fuzz and bass composed in retro-futuristic perfection, but there’s more variety, too. An industrial edge pops up in a couple of the new tracks, and Amm cites industrial as well as goth and early post-punk bands like Joy Division and Siouxsie and the Banshees as his other musical influences. But with all these early sounds of nihilistic gloom, why does the vast majority of Solvent’s music come out sounding so pretty?

“The music that I make just naturally happens… I can’t really control the outcome, there seems to be some sort of direction that I’m naturally predisposed to follow,” he explains.

Amm talks more about the nostalgia he has for times past, and changing musical climates, and even a gloomy outlook on the future of music, blaming the Internet for the death of localized movements of subversive, creative music (like Detroit techno), and hypothesizing about Toronto hipster clubs unfortunately sharing the same music as some random hotspot in Belgium. “You could probably expect to hear Justice in both of them, but I think, before, all these places would have their own local sounds or combinations of sounds that would accumulate,” he says wistfully. “Maybe the Internet will just explode, or something…that’s kind of what I’m hoping for.” Hmmm. So future doom and nostalgia for an earlier age from the artist behind Solvent who has only loved synthesizers and new wave, and goth and industrial, and who has never truly loved any other form of music which might explain how the most melancholy Solvent compositions come out pretty. Does that sum everything up? “When I was about 7 to 12, I was completely obsessed with The Beatles—that’s the first music I was really, really interested in,” he finally admits. “That is definitely the closet influence that influences my music!”