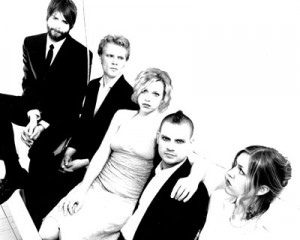 Bands that defy classification tend to frustrate and piss off music critics, who like to identify an artist’s genre within ten seconds of the first song so they can make lazy comparisons. This makes Canadian indie-rock quintet Mother Mother a nightmare, a band that sometimes evokes a different genre with each chord change. Over a number of reviews, I’ve seen them compared to the Pixies, Blondie, Queen, Matchbox Twenty, New Pornographers—tell me to stop before your brain explodes—and labeled as everything from glam-rock to folk-infused pop (glam-folk is gonna be one helluva genre, by the way). And the thing is, all of those labels sort of make a little bit of sense. Mother Mother’s sophomore record, “O My Heart,” bustles with gusto of the New Pornographers, occasionally goes into the screaming chorus of a Pixies anthem, but then somehow retains arena-rock production and the three-part harmonies sometimes heard in Queen’s catalogue.  There’s really only one way to describe this: weird, but it’s also intriguing, and featuring some of the better sing-along melodies since Matchbox Twenty (just kidding). (Andy Seifert)