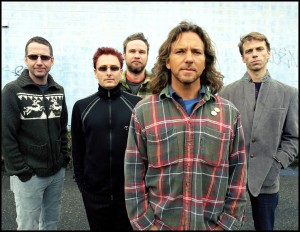 I haven’t heard all of Pearl Jam’s “Backspacer,” the iconic Seattle rock quintet’s ninth record, hitting shelves next month (without the help of a label, and with big-box exclusivity at Target). The band played the song “Got Some” on Conan’s first night on “The Tonight Show,” but the sound was so muddled you really couldn’t get a feel for it. The new record’s first single, “The Fixer,” is the catchiest song Pearl Jam has written since 1994’s “Better Man,” with its “Fight to get it back again/Yeah, yeah, yeah” chorus, which features Eddie Vedder’s trademark howl. I’ve self-identified as a Pearl Jam nerd for years now, but I have to say, this is the first record from the band that I’m not too anxious to hear, mostly because of the song titles. “Backspacer” features tracks titled “Gonna See My Friend,” “Johnny Guitar,” “Amongst the Waves” and “Force of Nature.” While it’s silly and unfair to have an opinion of an unheard song based solely on its name, I don’t think it’s unfair to at least say these are some horrible titles. Eh, we’ll see. As the band plays two nights in one of its favorite cities—Vedder grew up in Evanston—I’m sure we’ll get a solid preview of the record. (Tom Lynch)