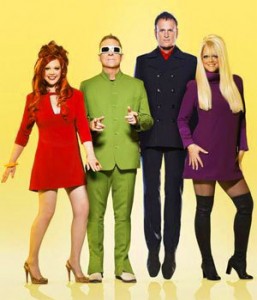 Fred Schneider, Kate Pierson and company sound pretty much the same in 2009 as they did in 1979, which is to say they’re still advocating wacky partying, dancing and the finer elements of nude beaches. The New Wave surf-rockers will forever be known for “Love Shack,” “Rock Lobster,” the terribly addictive “Rocco’s Modern Life” theme song and how the hilarious “Private Idaho” video was strangely badass, in a homosexual sort of way. Last year’s “Funplex” was the group’s first record in sixteen years and, surprisingly, it wasn’t half bad, as the band updated its sound with a twenty-first-century electro-pop flair while continuing to write about making love to everything that they see. Schneider’s weirdo talk-singing Sprechstimme always seemed about one step above how William Shatner “sings,” and while it can get a little old at times, it’s also given the band a distinctive identity, the perfect counterpoint to the syrupy melodies from Pierson and Cindy Wilson. That said—$56 for a ticket? Who do they think they are, U2? (Andy Seifert)