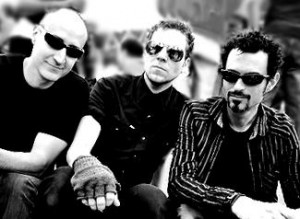 Sexy. Abrasive. The sounds of Chicago’s industrial-meets-techno trio, Kill Memory Crash, are bigger than a two-genre show. Better to keep it ambiguous to support the “dark electronic” label they receive from the press. Regardless, memories of the Windy City’s industrial conduit, Wax Trax! Records, are hard to ignore as the band’s catalog grows, permeated by effects-laden vocals and throbbing drums at play with synthesized gloom.

As they prepare to share the stage with their Ghostly International compatriots, their live approach endures while other sets are characterized by which laptop logo faces the crowd. (This interview was conducted over email and answers were given as a group.)

“We try to incorporate a more visceral experience by adding live drumming and a few keyboards to our live rig.”

While currently silent on the tour circuit, plans are afoot to hit the road again, and Kill Memory Crash can be found “somewhere in Chicago every couple of months.”

In 2008, their “Of Fire” EP offered signature vitriol, while subtly sliding towards pop-influenced structures. The result: a gritty, urgent, dance-floor-ready package. A few tracks from the “Of Fire” period are currently slated for release, and fans at the upcoming show will be treated to new material.

Each effort affords enhancements, adding elements or techniques to simplify processes and amaze the listener. When contemplating their achievements, Kill Memory Crash is quick to point out that the best is yet to come.

“When we look back at our first releases, there’s a sound and feel unique to that time—it doesn’t seem possible we could recreate that if we tried. We want to continue to evolve and surprise ourselves and it’s easiest to do if you feel as if there’s something more to achieve.”

Inspiring? Sure. But before you run out and buy a new synth, ponder these tips on achieving success from the group to budding producers.

“Get a real job and forget about the whole music/producer thing. If you find it’s too late to abandon the idea, you will want to stock up on some or all of the following provisions:

2. Canned goods, microwave-ready meals and K-rations (It’s difficult to smoke cigarettes, drink booze, play music and make a meal at the same time. This will save you both trouble and money.)

3. A three-to-four person tent (In case you become homeless while trying to crank out that hit record and want to have some company over.)

4. Girlfriends—lots of them (They will dig every track you produce! Works wonders on your self-esteem and self-worth)

5. Patience (Nothing moves quickly in the music business, except for maybe soundcheck, which never seems to be long enough.)” (John Alex Colon)