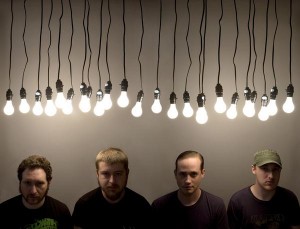 What do three IT guys and a grad student living in Chicago by way of Michigan, Kentucky and New Jersey have in common? I would say Millions of things. Millions is a local punk band defying the conventional precedent set before them in Chicago’s rich and historic underground music scene. Log in an approximate 12,048 miles on the road to the band’s odometer and it is still hanging tough even in the current state of music today.

Millions has been around since the fall of 2006, belting out its brand of hardcore punk, melding metal guitar riffs, guttural vocal melodies and angular time signatures. Guitarist and vocalist Scott Flaster defines the group’s sound as noise rock, whereas  Corey Lyons, who shares guitar and vocal duties alike, adds, “I like to just tell people ‘loud and screamy.'” Even though the band travels in and out of various music circles, Flaster jests that “sometimes we get some confused looks. Hell, most of the time we get confused looks.” The band released its first full-length, “Gather Scatter,” earlier this year on Seventh Rule, a label owned and operated by Flaster.

Millions took to the road this spring in support of its new album and this fall plans to hit Europe. Even so, Chicago is still Millions’ headquarters.  Flaster feels that Millions belongs here. “I do feel we are a part of the Chicago scene, and as far as I can tell, it’s a strong one. I have heard countless bands tell us that Chicago is always one of their best shows. We have a good set of promoters here and a lot of good rooms with awesome sound systems.  It’s easy to lose your mind sitting in a practice space all the time. Many of our local shows are supporting bands on tour and those bands often play with us when we are out on tour.”

Hitting the road is a big part of what holds Millions together.  Being cooped up in a van with three other guys can take its toll. Yet, as drummer Patrick O’Shea puts it, sometimes “it’s just straight bromantic.” Lyons, who grew up in Louisville, Kentucky—or as he pronounces it, Lull-vull—feels, “If I’m not playing dirty house shows or stinking up a tour van every so often I feel too,  I dunno, normal. That and I just feed off loud, noisy guitars. I need it as much as I can get it.” Regardless, O’Shea adds, “I just like to play wherever it is.”

Over all the hours crammed in the tour van, the band keeps it together enough to look forward. That’s miles ahead of some bands out there. Maybe it’s Millions’ ability to make light of any situation.  “[I] can’t really speak for the rest of the band,” comments Flaster, “but I would need to be on some kind of professional medication if I wasn’t in a band. We don’t make a living off of this but its way cheaper than therapy.” (John Wawrzaszek)