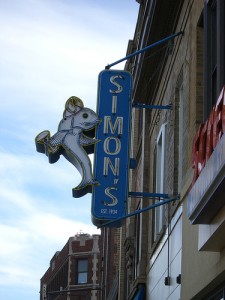 Free barbecue and live music will be served up September 12 at Andersonville’s Simon’s Tavern in the first edition of the Simon Say’s Music Festival. Chris Anderson of Last Alley Productions, who regularly books music for Simon’s, approached owner Scott Martin with the idea of a music festival. “I’ve done music there for four years,” Anderson explains. “I think the only real music you get up there [in Andersonville] is once a year at the summer music festival, but they’re mostly cover bands…this is obviously original, independent rock music.” The all-day event will begin at 1pm with music from Bucky Halker. Six more bands will perform throughout the day, all inside the bar, the last of which will be Inchworm at 10pm. Anderson says he would ideally like to have the festival twice a year—one at the end of summer and another during the winter. “It’s Americana pop, a little bit of folk,” Anderson says. “It’s a small place so we don’t want something too heavy. We don’t want to bring in original music that’s going to drive people away. We want to keep the volume down so people can listen and have conversation.”