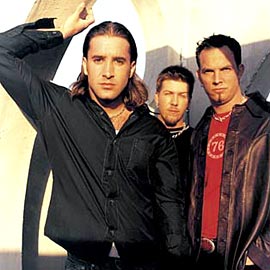 A confession: When I was 14, I asked my cousin to burn me his copy of “Human Clay,” Creed’s multi-platinum breakout album. I remember his reply quite vividly: “Aw man, you don’t want that. Trust me.” Even in his early teens, an age when taste in music is understandably poor, “Human Clay” had left him gaunt, beaten, with no sign of life left in his eyes, as if Scott Stapp’s absurdly insipid songwriting had somehow left his soul forsaken. When Creed broke up in 2004, America began to heal—but now this bane of music has reunited and is readying a new album, “Tattered Shit” (ok, it’s actually called “Full Circle,” but “Tattered Shit” feels right). I’m wondering: who in the world is clamoring for a Creed reunion? This is not like, say, Journey, where nostalgia and irony have created an unusual but explainable demand for “Wheel in the Sky”—Creed is a nauseous nostalgia, totally beyond enjoying ironically, the musical equivalent of a Natural Light can filled with bile. I don’t know of anyone who wasn’t dismayed by Mark Tremont’s utterly derivative guitar work or disgusted, in general, by Stapp, who sings like he’s struggling through the worst bowel movement of his life, yet acts like his lyrics are on par with Paul’s epistles. I couldn’t think of a more despised, more unwelcome band to jump back onto the scene, until I saw the opening act—Hoobastank. Did people stop listening to music after 1999 or something? (Andy Seifert)