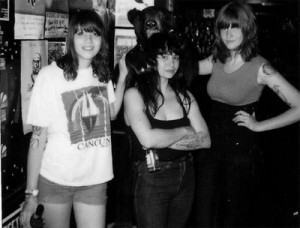 Brooklyn all-girl rock trio Vivian Girls shot to popularity after a roughly recorded CD-R of its music was passed around town—within months, the band was playing with the likes of Sonic Youth and Jay Reatard, developing the reputation for putting on a kick-ass show. The band’s lo-fi debut record, self-titled and released last year by Mauled by Tigers/In the Red, was one of the best of 2008, ten pop-poundings that sounded like an adorable baby that the Shangri-Las and the Wipers puked up. (Pretty sure with multiple listens, tattoos will just start appearing on your body.) Fuzzy tones and vocal harmonies galore, Vivian Girls breathed life into indie rock once again. The band’s follow-up, the charmingly titled “Everything Goes Wrong,” hits shelves next week, and it’s all improvement. Sound is better, the songwriting tighter. It may lack the basement-show power of the first record, but it’s evidence that Vivian Girls is gonna be around for a while, and we’re lucky for it. At Pitchfork this year the trio sledgehammered the small stage with an energizing set. Indoors, it’s even better. (Tom Lynch)