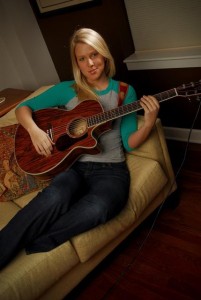 Claire Stahlecker’s music is similar to a breezy romantic comedy, one that’s pleasant enough to take in for an hour and a half, and not a piece that will torture you for days afterward. The Chicago singer-songwriter, still unsigned, makes a convincing blend of pop and folk; her songs stir with the honesty and emotional wisdom of a late-night troubadour, but she’s also not afraid of writing a hummable hook. On Friday at Martyrs, Stahlecker releases her first EP, titled “A Little Piece of Heaven,” and it seems like this is just the beginning for the young artist.

“The only thing that really motivated me to practice was to learn some of my favorite artists’ songs,” she says of the time she was learning to play. “I had been writing for a long time too. When I was a kid I used to write songs without an instrument, just lyrics. It’s weird to think about now. I never thought it would be a career.”

Stahlecker grew up in Lincoln Park, then relocated to Woodstock, Illinois, when her parents moved, but since has found her way back to Chicago. Only 22, she’s still learning, but she also says she’s at a disadvantage being female in a male-dominated genre.

“It’s a tough road for women,” Stahlecker says, “especially instrumentalists. Being a guitar player I get a lot of funny looks when I say I play guitar. There are not many well-known, phenomenal female guitar players. Because of that stereotype, people don’t take me seriously until I pick up a guitar and play. I’ll walk into Guitar Center, and all the guys will be like, ‘Hey, are you in a band’ or ‘Hey, what do you play?’ ‘I play guitar.’ ‘Oh, really cooool.’ I can see the sarcasm before it happens.”

Stahlecker, who studies music at Columbia College, says that the main challenge she faces now is the unpredictability of her songwriting. “I’ve never been able to tell myself I’m gonna write one,” she says. “I’ll get inspired from one thing and write a song five minutes later. I don’t really start a song and continue writing it over the span of months or anything like that. The songs that are really great tend to come out super fast.” (Tom Lynch)