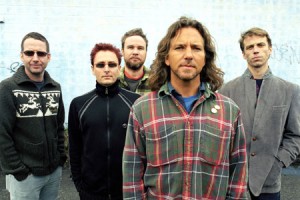 Now that I’ve had a couple days to let them sink in, I’m convinced the two Pearl Jam shows I saw this week, Sunday and Monday at United Center, were two of the best I’ve seen the band play.

Quite simply, the quintet appeared to have something to prove, that under no circumstance were they resting on laurels and phoning it in. I’ve seen Pearl Jam several times before—including one show at United Center in 1998 in which I sat front row—and it’s incredible, and surprising, to see Eddie Vedder as energetic as ever. He’s not climbing the rafters or leaping into the crowd anymore—save that for psycho David Yow—but his voice is as powerful as ever.

Working through its entire catalogue, Pearl Jam offered material from each of its nine albums, including the upcoming “Backspacer,” plus rarities and a whole boatload of covers. If I’m not mistaken, the band only played seven of the same songs on each night—new rockers “The Fixer” and “Got Some,” older favorites “Corduroy,” “Even Flow” and “Alive,” The Who cover “The Real Me” and traditional set closer “Yellow Ledbetter.”

Now, I’ve self-identified as a Pearl Jam nerd for just about my whole life, so I was pretty euphoric both nights, which combined I figure was about five and a half hours of Vedder and crew. That’s a lot of PJ for anyone. I’ve seen the band countless times before—seriously, I can’t even remember how many times, but I know the first one was in Milwaukee in the summer of 1995, and that I’ve also seen the band play in San Antonio and in Philadelphia. I’m thinking maybe twelve times, rough estimate.

The best part of these shows was seeing the band play songs I’ve NEVER seen them play before, which is a bit difficult, seeing as I’ve seen them so many times and they usually play through twenty-five or thirty songs during each show. For me, seeing them do “In My Tree,” from 1996’s “No Code,” always a favorite PJ tune of mine, was surreal and very, very cool. “Rats,” on the first night, was even better. “Hard to Imagine” and “Brother” were neat too, if a little strange, seeing as both songs are incredibly obscure. “Brother” dates back to the pre-“Ten” days, and “Imagine” was a castoff from the “Vs.” record—it appeared on the soundtrack to the John Cusack movie “Chicago Cab.”

Another great moment was Vedder’s tribute to Michael Jackson, a haunting, solo take on Neil Young’s classic “The Needle and the Damage Done.” (The singer also made repeated mentions of returning home to Chicago. He was born and raised in Evanston, actually, but we’ll forgive him that. For now.)

No “Jeremy” on either night. It wasn’t missed.

That’s about all. Honestly I thought I would have more to say about these two nights, but I just don’t. Maybe I’m just still exhausted from them.

But I was completely thrilled. It’s nice to feel that again, young and vulnerable, transfixed by something as simple as a rock band. (Tom Lynch)