by Andy Seifert
September 1, 2009Filed under: 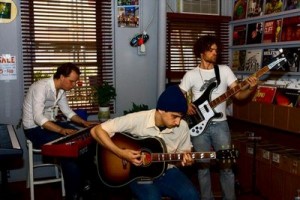 As one of those early afternoon, “nobody knows who we are” acts at this year’s Pitchfork Festival, Brooklyn quartet Cymbals Eat Guitars provided such a solid, spirited set that they ought to be upped to the mid-afternoon, “a few of you know who we are” time slot. The group’s recently released debut album,” Why There Are Mountains,” is a steady noise-rock affair, combining the better elements of Pavement (launching into feedback whenever the listener stops paying attention), Built To Spill (snappy, slightly out-of-tune guitars) and Wilco (smart use of “Yankee Hotel Foxtrot”’s distant, despondent piano), while slicing in a few jittery hooks amongst a wide palette of sonic ideas. At 20 years old, lead singer Joseph D’Agostino still can’t legally drink, but he’s already penned a critically acclaimed debut record (proving that you don’t necessary need to be inebriated to write records that appeal to indie-music critics). (Andy Seifert)