by Tomnewcity
September 1, 2009Filed under: 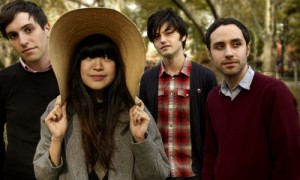 Of course the name is bad. It’s like, the worst. You thought Umphrey’s McGee was the worst? You were wrong. This is the worst. Zach Braff couldn’t have written something worse. The problem, the nightmarish dilemma, is that band is actually good. Really good. As far as debuts go, The Pains of Being Pure at Heart’s self-titled record from earlier this year, on Slumberland Records, flows and fuzzes gorgeously, a shoegazer pop record that sounds like Eugenius and The Jesus and Mary Chain. The vocal harmonies, while put to wildly lovable, simply structured pop melodies, break your heart. The band’s set at Pitchfork this summer was one of the festival’s highlights. Remember when Weezer was good? Like, back in the nineties? That’s what this feels like. The band shows monumental skill while it pieces together one catchy, exciting pop song after another; the future’s as bright as those treble-heavy Fenders being ravaged again and again. So you have to deal with the title. How many good band names are there anyway? Remove all musical associations, and from the list of the names of your favorite bands, try to pick out the monikers that are actually creative without being annoying. Can you? I can’t. After all, The Beatles and The Beach Boys were pretty stupid band names. (Tom Lynch)