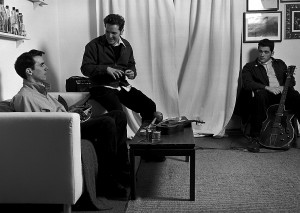 If you haven’t heard of The Safes yet, then you must not be related to them. This trio of family members—brothers Frankie O’Malley and Patrick O’Malley with cousin Patrick Mangan—belt out rock ‘n’ roll that could have been overheard coming from the Chess recording studio on Michigan Avenue back in its day. Yet The Safes can also hold their own amongst bands trying to resurge the garage-rock sound. It’s surprising how effortlessly the band crafts songs melding classic-rock riffs with pop melodies and a hint of rhythm and blues.

The Safes brothers grew up in the suburb of Park Ridge as part of a large family. Fortunately they grew around a family that housed a wealth of musical talent. It is a testament that over the years they have been able to keep the band in the family. “It’s the only thing I know,” says Patrick. “We’ve been playing together since we were kids.” The two are the main songwriters for the band, sharing guitar and vocal duties. “We are not ‘yes men’ for each other,” says Patrick. “We are one-hundred-percent honest with each other and both greatly value each others’ opinions and suggestions.”

This relationship may be the force behind the band’s relentless song output with four music releases under their belt and an equal amount of unreleased material. “Having the same background to draw from musically helps communication when working on songs,” says Frankie. One of their earliest albums was aptly entitled “Family Jewels.” Progressing since then, the brotherly songwriting duo was most recently captured on 2008’s “Sight of All Light.”

Their relationship carries onto the stage as each takes the reigns during their respective songs. When this occurs the other takes a seat behind the drum kit, pulling off this musical-chair lineup without a fuss. “Coming from a family of eleven we know the value of sharing,” explains Patrick. “There’s something special about sharing the gift of music with people.”

Playing live is still one of the main fuels to The Safes’ creativity. Since its inception the band has toured and performed in thirty-eight states and in more than a hundred cities. Frankie attests that, “We have consistently done more then two months on the road every year since we started.” As for home, Patrick enjoys the fact that Chicago attracts a certain level of talent, enough to keep him happy. “Most musicians and music lovers in other cities across the globe are not that fortunate.”

When most bands would be straining to keep from busting at the seams, The Safes family roots dig deep enough to keep the band from falling apart. Their dynamic comes off as genuine as their music. “There is nothing I would rather be doing,” Patrick says, “than playing in The Safes with my family.” (John Wawrzaszek)