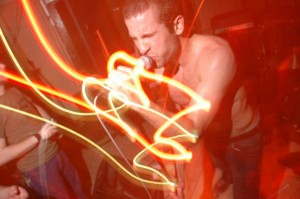 There are those bands you walk in midway through their set and wished you hadn’t missed a note. These are usually the same bands you hear your friends talking about, the one band that blew away the other bands on the bill. Enter 97-Shiki.

It’s outrageous to think that a band that has only been around since late 2007, and has played less than thirty shows to date, has generated this type of stature already. It helps that 97-Shiki is comprised of members who have been playing in seminal Chicago bands of the past few decades. It’s possible that 97-Shiki stays afloat because they are veteran musicians who have lived the spectrum of musical experiences. This could account for the fact that they are still functioning after they toured Southeast Asia. Drummer Kammy Lee’s philosophy might have been the reason why they have gotten this far. She explains one of the main requirements to holding it all together is “being able to ‘roll with it.’” Bassist Doug Ward, a scene veteran, commented on how touring abroad has reinforced “how fantastically lucky and spoiled we are, especially in Chicago.” Even so, Chicago is still home; one which has been very supportive of them so far.

It is also worth mentioning Doug Ward and Kammy Lee are married. Each was a member of the now-defunct Fourth Rotor, a band that also had overseas touring experience. Kammy and Doug agree that having the other in the band makes it easier to share the stage and create music together. But as Kammy Lee asserts, “There’s only room for one relationship, and that’s the band.”

This collective dynamic seems to be explained by the rather ostentatious mantra listed on its Web site: “This isn’t a business or a popularity contest.” When weighing the exploits the band has achieved, it seems 97-Shiki is earning its reputation on merit alone.

Band ethics aside, musically 97-Shiki literally pulls out all the stops. The jerky, precise music breaks accent the band’s driving danceable rhythms. Layer that with vocalist Ryan Dirkin’s guttural bellows and the band’s harmonious backing vocals. It begs the comparison to early Dischord bands.  It’s “kind of like a weird stew,” says Kammy. “We just respected each other as musicians,” says Doug, “and we knew that we’d walk into practice, let sounds come out, and not stop until we had good songs we all liked.”

For now, they are assessing possible tours to even more remote locations like Finland and Russia. “We’re looking for a new experience,” says Ryan Dirkin. Ward echoes this sentiment, explaining, “I’ve always preferred the ‘clean slate’ of playing to a crowd who have no preconceived notions about your band—the reactions are always a surprise and always genuine.” (John Wawrzaszek)