by tomnewcity
September 8, 2009Filed under: 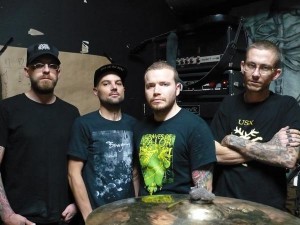 Remember that Aerosmith video where Steven Tyler breaks through the wall in an attempt to get Run DMC in the practice space next door to turn down their music? Instead of being neighbors to a rap group imagine if there was a band playing through a muddy wall of guitars loud enough to explode your eardrums. Then when dear old Steven pounded on the wall, his request was answered by amps that go to eleven. That band fittingly would be Indian.

By day the band members of Indian, guitarist and vocalist Dylan O’Toole, bassist Ron DeFries and drummer Bill Bumgardner are all employed at bars. It seems that working at a bar can be a rough gig in and of itself. For them the transition from behind the bar to upon the stage seems second nature. They let their music be the tough part.

Being around since 2003, Indian is no stranger to the city’s metal circuit. The local metal scene has gained national recognition during the last few years with bands like Pelican, Russian Circles and Sweet Cobra. Indian definitely is a name to add to that list.

When observing the metal scene here, DeFries says, “I’d say Chicago is doing just fine.” Indian doesn’t go out of its way to try to be part of this growing movement. “We never set out for any sound,” explains Defries,”it’s just what eventually came out.”

Indian has inevitably solidified its spot in the metal scene. It might help that they work in bars that double as music venues. In spite of that, Indian has also found a home on local record label Seventh Rule, which released all three of the band’s full-length albums. Even the ever popular burger joint Kuma’s named a buffalo burger after them. What else could they ask for?

Over the years Indian has fathomed the idea of bringing aboard a second guitarist, hopefully to heighten the intense wall of sound. “We’ve been talking about adding a second guitar for a couple years, but never came across anyone that would seem to fit,” states Defries.  Enter Will Lindsay, a resident of Olympia, Washington. Indian met Lindsay while touring with his band. But why couldn’t they find someone closer to home? Defries explains, “Dylan and I said to one another, if there is ever going to be a second guitar player it’s him.” Washington to Chicago is one hell of a commute but Lindsay plays in Wolves in the Throne Room, a band based there. He travels here to be part of Indian and could possibly become a Chicagoan in the near future.

To keep a lid on what to expect for this weekend’s show, DeFries proclaims, “as far as the band’s sound, you’ll have to come out and see it.” (John Wawrzaszek)