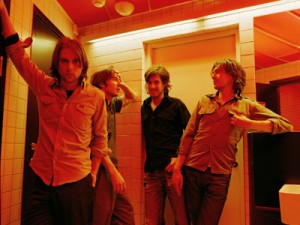 As much as I enjoyed French quartet Phoenix’s first record, there was still a lingering sensation after a few drippingly sentimental, overly romantic tracks, some of which could’ve probably fit in the freaking Doobie Brothers catalogue, that maybe this band would eventually make me question my masculinity. Thankfully, after the band’s latest, “Wolfgang Amadeus Phoenix,” I don’t have to hide my fandom for these guys. On the strength of singles “Lizstomania” and “1901,” not to mention an appearance on “SNL” where they were inexplicably allowed to play three songs, Phoenix has attained a little mainstream success, and it’s much deserved. “Wolfgang Amadeus” is a thrilling pop record, one of the year’s best, full of grand choruses and ultra-tight performances. The once-rampant sentimentality is gone, and even if it still existed it wouldn’t matter—lead singer Thomas Mars and company have perfectly crafted their sound into sharp, immediately recognizable tracks. (Andy Seifert)