by Dennis Polkow
September 15, 2009Filed under: 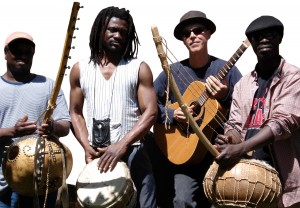 The opening day of the 2009 World Music Festival will begin as will each weekday of the weeklong festival, with a two-hour noontime performance and interview in the Chicago Cultural Center’s Claudia Cassidy Theater that will also be broadcast live on WNUR (89.3 FM).  Slide guitarist and vocalist Markus James will be among those spotlighted opening day, viewed by many as a successor to his Malian mentor, Ali Farka Toure.  Like Toure, James plays and sings blues that combine African rhythms, pedal points, repetitions and antiphons with Mississippi Delta blues-style improvisations and melancholy.  His group the Wassonrai is made up of Malian and Guinean musicians based in the States, including multi-instrumentalists Mamadou Sidibe, Amadou Camara and Karamba Dioubate.  Markus James & the Wassonrai will also headline the Uncommon Ground Outdoor Harvest Party Friday evening (9pm) and will also headline the Saturday night show (8pm) at the Old Town School of Folk Music.  But if you’re not into American meets African roots music, no worries: there are no less than fifty-five performances across twenty-one venues by artists representing thirty-two countries all week long.  New this year are five new venues, including Bottom Lounge, Edgewater GRalley Festival, Green Dolphin Street and Chicago Park District field houses at Kelvyn Park and Washington Park.  Also new are five free noontime concerts (Sept. 21-24) at Millennium Park’s Pritzker Pavilion.  This year’s eleventh annual festival will showcase no less than twenty-seven Chicago debut performances and the United States debut of Turkey’s Mehter Ottoman Turkish Military Band, which will headline a Millennium Park Pritzker Pavilion performance on Monday evening (6:30pm).  Navy Pier, a festival venue, will be blowing off fireworks tonight and Saturday at 9pm in salute of the festival.  (Dennis Polkow)

Visit www.WorldMusicFestival.org for a complete day-by-day schedule and festival updates; most events are free, but most ticketed events are less than $15; (312) 742-1938.