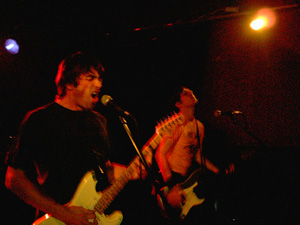 Horace Pinker has been around the punk music scene for too long to recall. Bands with such longevity are easily overlooked, even though they rest right in our backyard, and have done so since 1995. Gracing the stage of the Fireside Bowl is a feat modern acts won’t ever be able to experience. Horace Pinker has survived through it all, via personal values and a bit of good humor.

The band—bassist Greg Mytych, guitarist Scott Eastman and drummer Bryan Jones—have been around making tracks for a long time. Touring cross country and self-releasing records was the band’s means of doing so. That ethic has taken them around the world from Europe to, most recently, South America. Over the years the band has taken a breather, slowing down the pace, while adult responsibilities and the changing music scene influenced some decisions. Yet they remain lighthearted about it all, not even looking for the finish line. “Once we tour Japan we can finally pawn our equipment and light ourselves on fire,” kids Jones.

Horace Pinker left its mark with the 2005 album “Texas 110,” released by local label Thick Records. “It’s kinda like being on the cool ‘hometown’ label and it gives you some sort of validation for being a local band,” says Jones.

“I think we’re lucky to have gotten the opportunity to work with them,” adds Mytych, “and damn lucky to be able to release a record at all.” The band’s thankfulness for this opportunity is undoubtedly due to that fact that it is becoming increasingly harder for bands to find themselves a home on labels. “Times are hard for the industry, so who knows if labels will even exist in a few years as they do now,” says Eastman.

The landscape for music has drastically changed since the members of Horace Pinker picked up their instruments. To Eastman, “the biggest difference is the option to make it big. That just didn’t exist for most punk bands in the eighties and early nineties.” Horace Pinker fits into the same mold as bands like Jimmy Eat World, Samiam or, locally, Smoking Popes, bands that have worked hard throughout their careers and weathered the storm. “Maybe I am sounding like a cranky old man,” says Jones, “but I just don’t see the DIY effort like we did back in the day.” The band’s success hinges on its ability to define its own rules. “None of us are trying to make a living off it anymore, so it really takes the pressure off the business side and lets us just focus on having a good time playing music,” Jones says.

That could be a reason why the band has taken its time to return to the hometown stage. “Hopefully the crowd will be well liquored up by the time we play,” Jones jests. This show will be its first in Chicago this year. For a band that has been together so long, they seem fine with that.