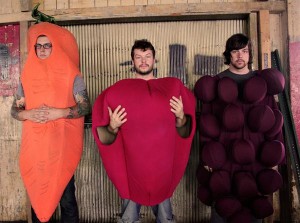 No matter what genre you throw them into, they’re going to break it and melt it to a glowing mound of feedback and thunder. Constructed from the remaining three members of Louisville hardcore giants Breather Resist, Young Widows eases up without toning down. From the first note of the opening track of the band’s latest album, “Old Wounds,” the bass rolls in with a rhythm forcing one’s head to rock back and fourth in anthem-like response. From there, it only gets bigger and louder, barreling down a familiar road, but this time in a monster truck waving a tattered American flag, while sporting lyrics like “lucky and hard-headed” and “got addicted at an early age.”

Young Widows’ sophomore release brings with it a sense of modesty and maturity. Loud music doesn’t need ear-piercing screaming and a speed-metal pace for it to grasp the true meaning of heavy. Taking a look back in time at bands like Jesus Lizard, Shellac and Helmet, “Old Wounds” brings a refreshing feel to a scene flooded with cheesy breakdowns and undistinguishable grindcore. Even if Kentucky is considered The South, Young Windows have a Midwestern feel that makes a smooth medium of southern rock and rolling rhythms, going so far as sassy. The album was uniquely recorded, using traditional studio takes, but more interestingly, live recording from a set of midwestern shows, including one at the Beat Kitchen, tracked by the master of punk-rock avant-garde, Converge guitarist and God City Studios owner Kurt Ballou. The record feels like a live album with audience noise strategically scattered and an airy echo as if the listener is standing in the middle of the club while possessing the tight, chunky grooves of a polished piece of work.

Adding to the arrangements is a live show that clashes dive-bar intimacy with massive arena appeal, playing the album in its entirety, beginning with total darkness until floodlights smack you in the face, casting members like silhouettes. But with the album already over a year old, Young Widows is busier then ever with a series of high profile seven-inch splits with the likes of Melt Banana, Bonnie ‘Prince’ Billy, My Disco and local favorites, Pelican, along with two releases on acclaimed obscure label Robotic Empire, including a live recording on WMUC Radio.

Evan Patterson, guitarist and vocalist of the group, says, “the split series was a result of the four songs that didn’t make it on to ‘Old Wounds.’ Sequencing the record was extremely tedious. After considering length, mood, dynamic, lyrical content and the transition from one song to another, we decided to make sure each song we cut from the record got its own individual proper release.” Will Oldham’s alter-ego is a fellow Louisvillian and label-mate with the group, so the match was no question. “Pelican was the first to join. They are some of our closest friends and they’ve taken us on tour and really helped out from the beginning. Melt Banana took Nick and my old band on tour four years ago and we built a pretty solid relationship with them.”

Rounding out the four-part series with the band’s current tour-mates My Disco, Young Widows brings range on each little black piece of vinyl. If a fan is lucky to own all four, the record covers come together to form their colorfully creepy skull design that has a running theme in recent recording, even going so far as to have it featured in a somewhat improv-to music video filmed in a dive bar of their hometown.

Between multiple tours on both sides of the pond, the trio has been writing its follow-up, which will see the light of day next fall, but sneak peeks are made on their upcoming U.S. tour with longtime screamo icons Thursday.

As Young Widows develop a fan base as diverse as its tunes, the question of fame and stratum slithers around one’s head like a curious beast, but Evan gives a refreshing output to a prompt most musicians rehearse like a Grammy acceptance speech.

“Stardom is quite a bold idea and doesn’t cross my mind. I have no desire to be famous or get to stardom status, if that’s what you are insinuating. It’s all about perception and passion. The two Ps. Honestly, I try not to think about these things because it always seems to take away from the progressive/creative side of art and music. If a band wants to break up… break up and if they want to get back together… get back together. There should be little to no stress involved in creating music. It should be relaxing and rewarding. The two Rs. Ha.” (Jonathan Kaplan)