by tomnewcity
September 22, 2009Filed under: 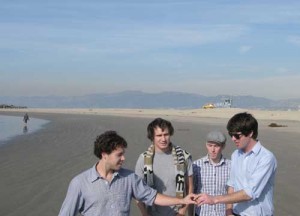 San Diego four-piece The Soft Pack play a powerful sort of revivalist sixties punk that’s as energizing and motivating as it is simplistic, snotty fun. Much has been made of the band’s history thus far, having changed its original name, The Muslims, reasons still unclear, after already gaining some notoriety and modest acclaim. With just a couple EPs and seven-inches out so far, The Soft Pack haven’t made much of a recorded statement, but live shows have been intense and smartly endearing—you can tell these fellas have read their books. It takes intelligence to craft such engaging material with such basic elements, and the cleanly presented guitars and howling hooks are the swarmiest thing this side of the Brit invasion. Watch out for this band, they’re definitely onto something. (Tom Lynch)