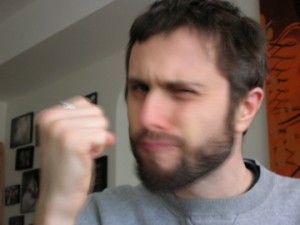 As post-punk usually signifies a genre, in the case of Dylan Posa and Three Cheers for One Dead Man, it not only helps describe the band but also those creating it. This band manifests the idea of what happens when punks grow up. Headed up by Dylan Posa on guitar and vocals, he acts as a sort of Cab Calloway bandleader peppering in humor with musical artistry. Posa has paid his dues in the indie-punk scene playing in acts such as Cheer Accident and the Flying Luttenbacher—now he manages the Reckless Records store downtown. The other band members maintain ex-punk-rock lifestyles as adults—one works as a day trader on the stock market and another is an attorney.

“All the musicians in the band came from various sub-sects of the Chicago Music scene, so they all bring their own development into the band,” says Posa. Joining his ranks are fellow scene veterans drummer Eorl Scholl and bassist Justin Wexler, proprietor of Forge Again Records. Add to their ranks the recent addition of a horn section featuring Elanor Leskiw on trombone and Dave Levine on sax.

Their sound has a unique feel with its long, flowing free-form jam sections and its tongue-in-cheek banter. Songs feel angular as well as fluid, with musical interludes seemingly created on the spot that end on a dime. Post-punk might even be a dated description: It’s like listening to Fugazi or Nation of Ulysses while the television is spewing dialogue from syndicated sitcoms. Posa describes their sound as Mathpop. “I finally started finding people I wanted to play with who could execute complex time signatures and subtle in-jokes with equal finesse,” he says.

Even as Posa is the primary songwriter he welcomes the rhythm and horn section’s creative accompaniment, which heighten the song’s movements. “I leave a lot for the individual players to expand on,” says Posa modestly. This encouragement in free-form song structure comes naturally from each member, possibly based on their varied music backgrounds and mature attitudes. “I think I write things that sound freer than they actually are,” explains Posa.

In the end, they all create something that is completely different and unique each time they take the stage. Even though Posa’s name graces the band’s moniker, it is a joint effort that defines the band’s eventual sound. Posa says, “I like to leave myself open to random chance acts of brilliance with this group. They inspire me.” (John Wawrzaszek)