by Dennis Polkow
September 29, 2009Filed under: 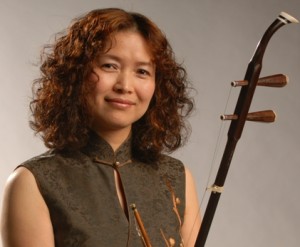 Fifty years ago, two Shanghai Conservatory of Music students—Gang Chen and Zhan-Hao—wrote and premiered a unique work fusing traditional Chinese music with Western classical music called “The Butterfly Lovers” that initially was a sensation and became widely performed.  Five years later as a prologue to the Cultural Revolution, the work was declared “decadent” by the Communist Party, performances were banned and its composers were sent off to prison.  After the death of Mao Tse-Tung in 1976 and the end of the Cultural Revolution, the work began to reappear and has been the signature piece of East meets West both within China and abroad ever since.  It is this piece—with Chicago erhu soloist Betti Xiang—that will take the spotlight in the Chicago Sinfonietta’s season-opening concert appropriately called “West Meets East” and which will also feature the Chicago premiere of Chinese-Canadian composer An-Lun Huang’s “Saibei” Dance from his “Saibei” Suite, a 1975 piece that spotlights the percussive woodwind style typical of the Saibei region of northwest China.  Also on the program: Ravel’s “Ma Mère l’Oye” (Mother Goose) Suite, which includes Ravel’s attempt to emulate a Javenese Gamelan ensemble style in “The Empress of the Pagodas,” and the Rachmaninov First Piano Concerto with Chicago pianist Jeremy Jordan.  Sinfonietta founder and music director Paul Freeman, who is stepping down this season, will share the podium with Atlanta Symphony Orchestra assistant conductor Mei-Ann Chen.  (Dennis Polkow)